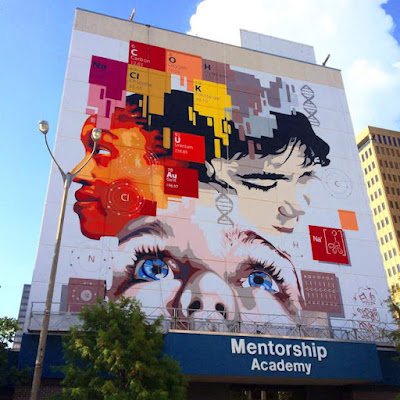 Eduardo Mendieta and two other recognized South Florida urban artists recently completed a spray paint mural in Downtown Baton Rouge. The mural covers the entire 6,000-square-foot front wall of an urban science, technology, and arts high school called the Mentorship Academy. The mural is titled "On the Shoulders of Giants" and illustrates the importance of science and art education to inspire students. 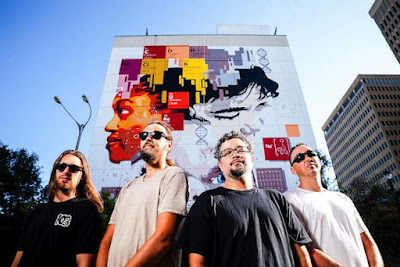 The artists, Mendieta, Jay Bellichi, and Paul Hughes, do great spray paint work in the Miami area and came to Baton Rouge to work with the Walls Project  a nonprofit group that organizes murals in public spaces to beautify Baton Rouge. This mural is the largest street-style mural in the area and contributes to the ever growing public art scene in the city.

The mural was sponsored by Solutions Through Science, a partnership of vinyl and chlorine producers in Louisiana, to support science education and students. "On the Shoulders of Giants" is a remarkable mural that celebrates urban art and culture.

Eddie Mendieta: He has worked in West Palm Beach, FL for 20 years and has been interested in graffiti and fine arts since an early age in Union City, NJ. Eddie works mostly in urban art and has completed murals nationwide. Eddie has completed murals for XLVI Superbowl Indianapolis project as a featured artist, murals for Art Basel Week in Miami.

Jay Bellichi:  A Boston native who moved to Miami in 2000, Jay focuses on abstract art on canvases, walls, and fine art pieces. Jay tagged under the name “Remote” He founded “GRAFF TOYZ,” a company that produces graffiti inspired décor pieces and art objects and co-founded ALT SPACE, an artist-operated gallery in Coconut Grove

Paul Hughes: Lives in Boca Raton, FL. His primary focus is painting walls in South Florida and he has also been featured in Art Basel Week in Miami.
Posted by Susan