These are pretty amazing: 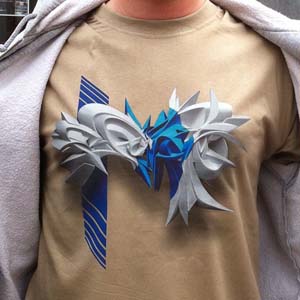 l'exposition en entier sera visible en 360° le samedi 5 mai a partir de 13hrs sur le lien suivant :
the show will be viewable in 360° on saturday 5 may from 13hrs on the following link : 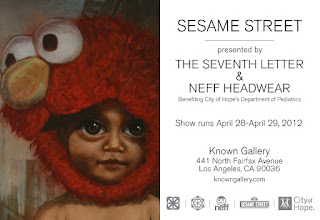 -Free and open to the public-

Read about the show at:

Stop Cyber Spying - a week of action against CISPA

Please participate. CISPA is worse than SOPA/ACTA and it already passed the House of Representatives in the US. It affects everyone whose internet traffic crosses US servers. Basically everyone. It's a Big Brother move to remove due process and allow spying on anyone's internet traffic anytime, for any alleged reason.

Related: Find out if your representatives voted for it and complain to them and the corporate sponsors named. They deserve your contempt.

The Senate and those companies need to hear the noise we make about this online and on their phones, in the next few days. We can't depend on the President to veto it, because his track record on civil liberties is very poor so far. 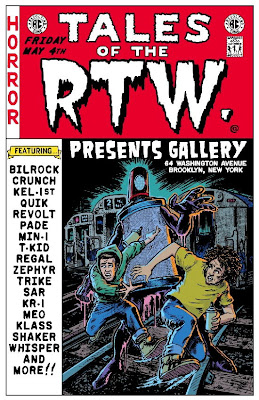 [Whoa!!! A historic occasion not to be missed. - Susan]

Canvas by MTO: DOUCE FRANCE : some dust under the carpet (unfinished painting)

DOUCE FRANCE : some dust under the carpet (unfinished painting), a photo by MTO (Graffiti Street art) on Flickr.
Posted by Susan

DOUCE FRANCE : some dust under the carpet (unfinished painting), a photo by MTO (Graffiti Street art) on Flickr.

These paintings by MTO are so striking that I just had to share them.

Primary Flight is a collaborative curatorial organization dedicated to the production of site-specific, street-level and indoor, murals and installations. Since its inception in 2007, Primary Flight has brought together more than 150 of the world's most influential artists to install their work live.

Greensboro is pleased to host Primary Flight for their first public commission. (primaryflight.com) 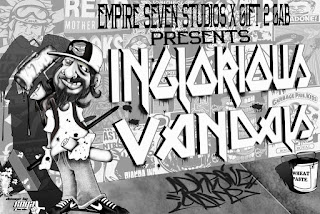 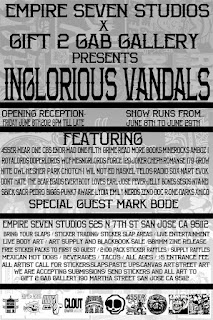 An all-artist call for stickers, slaps, paste ups, canvas art, street art. We are accepting submissions from all around the world to make this show one of the best “street art shows” to hit San Jose yet.

We are also doing big paste-up installations! For those who are interested, please contact us ASAP, as spaces are limited and will go fast.

We will be accepting submissions till day of show.
Submissions will be accepted in person at both of these locations, but if you're mailing them, send them to the gallery:

Mail art and stickers to:

JUST TO NAME A FEW - WITH MANY MORE ARTISTS TO COME ... 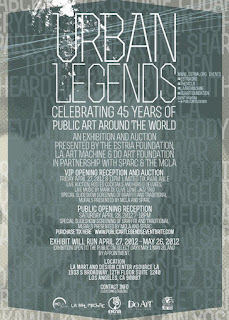 Oakland based arts organization, The Estria Foundation (TEF), known for their nationwide graffiti competition (The Estria Battle), and global #WaterWrites Mural project, is honored to announce ‘Urban Legends’, Celebrating 45 Years of Public Art Around the World, opening Friday, April 27th at the LA Mart Design Center, Downtown Los Angeles. This “first of its kind” exhibition with works for sale and auction, will showcase and celebrate 45 years of global public art, from the mid-1960s; through today, including examples of how this movement is affecting and uplifting urban life through the vibrancy of color and large-scale sociopolitical works of art, inclusive of all global communities, highlighting artists from the U.S., Europe, Africa, Mexico, and more.

The legendary roster of more than 40 includes distinguished pioneers of the '60s & '70s revival of muralism in Los Angeles, Judy Baca (USA), Kent Twitchell (USA), and Master typographical graffiti writer Chaz Bojorquez (USA.) In addition are many prolific artists of the hip hop movement, as well as traditional muralists who began in the ‘80s and ‘90s, and are now today’s most sought after, collected and internationally known urban/street/graffiti artists including, among others, Vyal, Mear One, Kofie, RETNA (Los Angeles); Estria (Hawaii); Brett “Dizney” Cook (Berkeley), SANER (Mexico), and Vogue TDK (Oakland).

The show will offer works for sale and auction, commissioned by The Estria Foundation, The DoArT Foundation, and L.A. Art Machine’s Vox Humana program, as well as showcasing on loan collections representing historical site specific installations from The Mural Conservancy of Los Angeles (MCLA), Social and Public Art Resource Center (SPARC) and Graffiti of War Project. A focal point of both the VIP and public openings will be, The MCLA’s inaugural slideshow screening of the Graffiti Visual Mural Tour, and an exclusive screening of SPARC FROM THE ARCHIVES: 36 Years of Community Mural Making. Select pieces from TEF’s Estria Battle, will be exhibited for the first time since the competition began five years ago, and will be included in the evening's live auction, and for sale.

The evening will conclude with the ‘Urban Legends’ Fine Art Live Auction, a first of its kind in Los Angeles, happening during the VIP opening. Included will be select works from past exhibitions, installations, and public art & music festivals, spanning decades, as individually curated by the contributing organizations - and auctioned under one roof the evening of Friday, April 27th.

Details for both nights are listed below, and are ticketed events, benefiting all artists, presenting and honorary partner organizations. Tickets may be purchased in advance at: http://www.publicartlegends.eventbrite.com/ (or at the door unless sold out.) The Estria Foundation was founded in 2010 by graffiti artist Estria Miyashiro, and Jeremy LaTrasse, co-founder of Twitter.

Free admission to ‘Urban Legends’ will begin May 1st. This exhibition is open to the public on select days Tuesday, May 1 through the closing on Saturday, May 26, 2012 and also by appointment. For sponsorship opportunities, press credentials, and media interviews, please contact: Shawni D. at: UrbanArtPR[at]gmail[dot]com // 213-255-0059 or Paloma Belara at: paloma[at]estria[dot]org // 415-992-1428.

Gear: LED light on a spraycan might be interesting

The computer hacker scene, particularly the demoscene, is one of the closest analogs to the graffiti community. In the demoscene, hackers crack games and write all over them with clever graphics and hand-drawn lettering, all done in machine language. (Machine language is code just talking to the chips without any of that fancy high-level computer language or 3D software application getting in the way.) The result is elegant, small, fantastic, and battle-ready. And demo crews do battle. Regularly, for decades now.

There's a new documentary about it, called Moleman 2 (free, complete, on YouTube, see below).

But first, to whet your appetite, below is a 2007 winner by Farbrausch, who just released some juicy sourcecode on Github.


Here's the elegant part: This video's original is a 180k snippet of code. One digital photo on your phone is likely 25 times that size! This blog post is probably bigger than 180k. And there's lots more where that came from. Check the relateds and do some searching.

If you only have 10 minutes: (Click "CC" to get English subtitles.) Here's the best overview Moleman has about the lettering: http://www.youtube.com/watch?v=iRkZcTg1JWU&feature=youtu.be&t=50m It's not the best ever done, but you get the idea.

Read the part at the bottom that says if they bite your work it's okay with you. That means: don't show them your whole portfolio. Just give them a taste of what they asked for.

UPDATE: Ars Technica explains some things about how the digital Tupac was created [It's not technically a hologram, but still, very interesting]
Posted by Susan 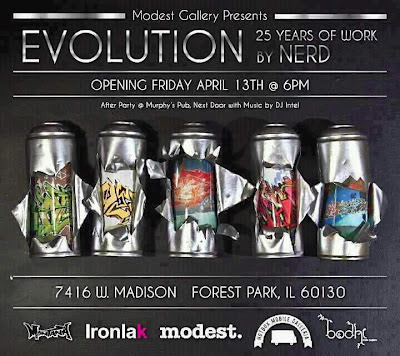 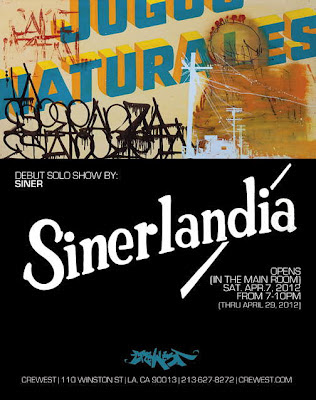 Tonyʼs Gallery is delighted to present “Smiling Since 1999″ – the first UK solo exhibition by the legendary Spanish street artist PEZ.

PEZ first started painting his iconic ‘smiling fishʼ logo in the streets of Barcelona in 1999 and has since established a worldwide reputation with exhibitions in Europe, America and Asia. Now PEZ is bringing his happy and fun style to London for his exhibition at Tony’s which will celebrate his work and bring some colour and cheer to the streets of the capital.

PEZ currently lives and works in Bogota (Colombia) and will draw inspiration from his country of residence to develop his solo show at Tony’s by creating a Colombian beach bar installation within the gallery space.

The exhibition will feature an in-situ mural presenting PEZ’s recognisable fish jumping in from the street walls outside onto the canvases within the gallery, alongside a direct intervention onto the gallery walls and a selection of new works including canvases and limited edition screen prints.

Visitors to the gallery will be able to experience positive vibes from PEZ’s smiling fish artworks and enjoy the chilled out atmosphere of the PEZ BAR.

Look out for PEZ’s fish as they will be popping up in all kinds of unlikely places around Shoreditch over the next month.

For any further infomaition, press enquiries or to interview the artist please contact Tony at info@tonysgallery.com

343 Lafayette street, just north of Bleeker.
6 Train to Bleeker street and you're there!
Opens at 1pm.
www.facebook.com/hiphopusa1
@hiphopusa1979

Hip Hop USA will also be conducting a Hip Hop USA Sneaker Art Battle that day for artists of all ages and abilities as we continue our search for the next limited edition sneaker artists. Markers and sneakers supplied. No purchase necessary to participate.

Artists are encouraged to bring accessories and materials to make their sneaker art stand out from the pack. 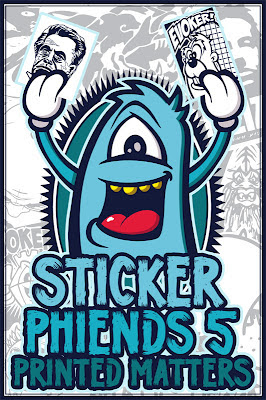 Printed Matters is a group print show hosted by the infamous Sticker Phiends.

All Ages!
FREE Handouts provided by our sponsors & artists
21+ID= Drinks
& Much More!!
Posted by Susan 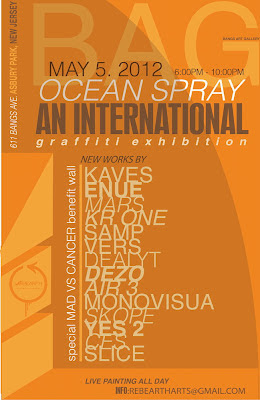 Used with permission. The image below is the pretty PNG (big). Above is the quick and dirty JPG (smaller)