Mutiny Of Colours (Trailer) from Zeinab Tabrizy on Vimeo.

Susan says: They plan a Kickstarter later on, so follow them on Facebook or send them a message to stay in the loop. 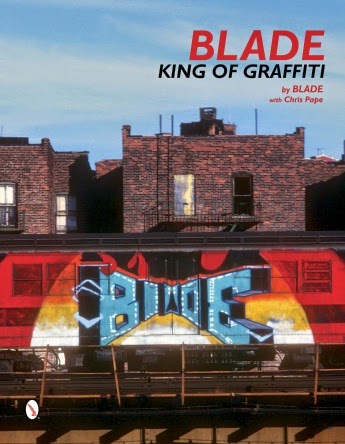 BLADE has already told his life story through graffiti. Now, more than forty years into his career and armed with an incredible memory, BLADE sits down with Chris Pape to reflect on growing up in the Bronx in the turbulent 1970s, and recounts the highs and lows of his storied career, holding nothing back.

BLADE is considered “The King of Graffiti” because, by 1980, after painting 5,000 wildly creative trains, he stopped counting. This book parallels the New York graffiti movement almost from its inception, moving through its glory years in the mid-1970s, when BLADE earned his title, and ending in the global art scene, where he remains a major presence.

BLADE helped New York graffiti become internationally famous by making it look fun, and, for reasons of quantity, quality, and, perhaps above all, for sheer spirit, BLADE may very well be the most popular graffiti artist with his peers. 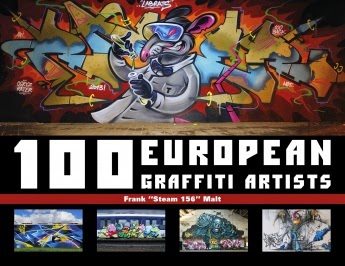 One hundred extraordinary artists representing many European cities, each with its own and often uniquely inspiring graffiti scene, including London, Amsterdam, Paris, and more.

This dense, sprawling portfolio is the product of “modern day documenter” Steam 156′s undisputed knowledge of European graffiti, and includes artist profiles, most written by the artists themselves, crew affiliations, locations, the year they started, details about style, influences, and characteristic strokes, contours, and angles, with hundreds of photos in all.

A medium of powerful, youthful, artistic expression, graffiti spread rampantly across Europe in the early 1980s–and has never ceased. Cities across the continent are now hosts to halls of fame, abandoned spaces, and streets full of incredible work by artists, featured in this book, who are carrying the art form boldly into the future and expanding its influence even further.

Schiffer Publishing, Ltd. is a family-owned, independent publisher of high-quality books. Since 1974, Schiffer has published thousands of titles on the diverse subjects that fuel our readers' passions.  Visit www.schifferbooks.com to explore our backlist of 5,000+ titles.

International Meeting Of Styles - "Cause And Effect"
Official schedule: http://www.meetingofstyles.com/blog/mos-2014-cause-effect/

Catch this worldwide festival in a country near you!
Posted by Susan

Under Pressure is the largest and longest running event of its kind all across North America. Under Pressure is a graffiti festival which focuses on community development, artist empowerment as well as positive youth development through ownership and responsibility of a shared space. Currently heading into its nineteenth year this festival is the longest running graffiti and hip hop festival in existence. The main reason it has been able to be sustained for so long is because it is an event done by the community for the community, everyone who works on keeping it alive does so on a volunteer basis.

The festival takes place over two days, during the first full-week weekend in August. Throughout the two days stages are given over to performers from across the country to keep the crowd lively and the bboy and bgirl battle which always goes down on Sunday afternoon. There is a kid’s area for the little ones to get creative and a skate ramp set up over the course of the two days for open jams and a competition as well.

Susan says: Please tell everyone. This is a world-class event.
Posted by Susan