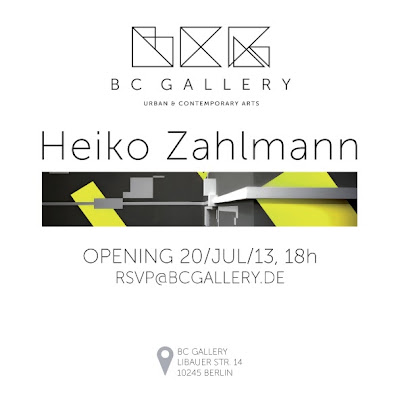 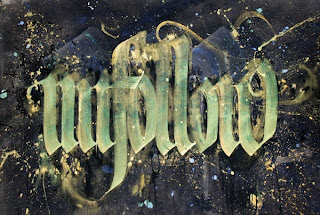 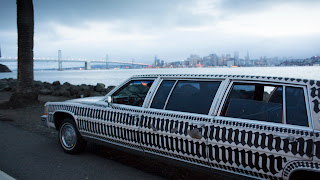 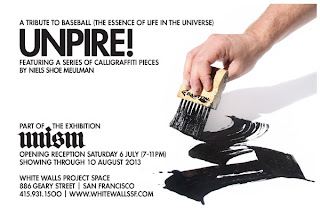 White Walls is pleased to present Unism, the latest solo show by internationally acclaimed Niels 'Shoe' Meulman, opening July 6, 2013 from 7-11pm. The exhibition will be on view through August 10, 2013 and is free and open to the public.

After he coined the term Calligraffiti to describe his work in 2007, artist Niels 'Shoe' Meulman (Amsterdam, 1967) returns to San Francisco with a new phrase and eponymous exhibition: Unism (pronounced un-ism, not u-nism).

According to the designer-turned-painter, Unism incorporates all aspects of his expressionistic work:

"Unism is about the power of reversal. For example 'turning darkness into light' taken from a monk's poem that describes both the illuminated letters in medieval scriptures, as well as the wisdom they brought to the dark ages. In those days, some were trying to turn lead into gold, so it's no coincidence that I use lots of metallic paints.

But Unism also refers to modern vocabulary in which we find many new words like 'unlike', 'unfollow' and 'undo'. I've been painting my signature repetitive strokes for years now. This started as a practice to get my hand, wrist, arm and body in the right flow. It became somewhat of a meditative act. The uncanny thing was that four of these strokes actually make up the letters 'u' and 'n'. Since my graffiti days I realized that every word is also an image and that writing can be painting.

I've been working with the word 'unruly' for years, which basically is a reaction to our overly-regulated society. That ended up in the throwing of paint bombs which contrasted nicely with the grid-like fields of the repetitive strokes. It ties into the ultimate example of my reversal theory; order and chaos."

Especially for this exhibition a 1984 Cadillac Fleetwood limousine will be transported from New York City to San Francisco. This six-door limo was painted by Niels 'Shoe' Meulman and presented at the notorious Wynwood Walls during Art Basel Miami 2012. The hood, trunk and other pieces will be sold as separate pieces during the exhibition.

Also on display during the exhibition: As a tribute to the game, Meulman will create a series of Calligraffiti works titled Unpire! to fill the White Walls Project Space depicting various baseball terms painted with official umpire's brushes. Unusual tools are standard practice for Meulman, who has used brooms to paint all over the world, from the streets of Singapore to the floor of a boxing ring for Louis Vuitton’s tribute videos to Muhammad Ali. Using traditional wooden plate brushes, the Dutch artist honors America’s favorite pastime with a sweeping elegance. And what better place to do this than in the World Series-winning San Francisco?

These are scenic photos of New York City back in the day. Some of them have graffiti in them. Most of the photos are amazing because they show us a New York, and a world, that doesn't exist anymore.

MA, Boston: Hall of fame to be torn down - See it while you can 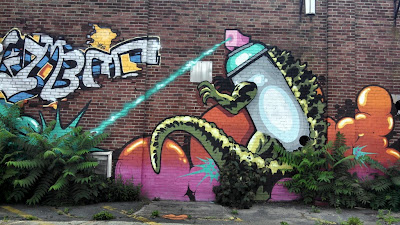 An open graffiti park that was recently set up at a 125-year-old abandoned bus garage in Boston is set to be demolished in November, in order to build a set of apartment buildings.

[If you're in Boston, please document the spot with your photos and put them on the open web (someplace everyone can see them without having to log in). We'll try to archive some too.  - Susan]

Where: "Bartlett Yard, an 8.6-acre parcel of land just blocks away from Dudley Square in Roxbury, formerly used as a bus garage by the MBTA."
Posted by Susan

We are pleased to present “The Future Is Now” at The Highline Loft, NYC’s renowned gallery located on The Highland Park in Chelsea, NYC.

This unique Invitational brings together a curated selection of prolific street and urban contemporary artists and musicians for a weekend of cutting edge art, music, technology and performance.

McDaniels, who has family roots in Trinidad, invested his time and money into Video Music in 1983 when hip-hop was in commercial infancy. Exposure on McDaniels’ New York show greatly boosted the popularity — and music sales — of many now famous stars such as Run-D.M.C, Notorious BIG and Grandmaster Flash and the Furious Five. McDaniels also used the show to spread messages of unity, non-violence, anti-drug abuse, anti-crime, political activism and self-respect to his predominately young viewing audience. Today, the show airs on NYC-TV Wednesdays at 11:30 p.m.

From the flat fields of Ohio to the concrete jungle of New York, Todd Sines' environments; real and virtual, have served as inspiration for his unique, hybrid sound. His post punk, industrial, and hip-hop upbringings, filtered through an obsession with analogue and early digital technology, resulted in stripped down electronic funk; before minimal was mnml - it was just effective. Since his move to New York in 2003, he's worked with a variety of other artists, including !!!, Death in Vegas, Liquid Liquid's Sal Principato and Apollo Heights; he's remixed Alexander Robotnick, Paul Randolph, Robert Owens, Moonstarr, Adam Marshall, Lanoiraude and more.

Curated by: No Agenda, Ad Hoc Art and Melissa McCaig-Welles
Posted by Susan

The festival organized by the teenage kicks graffititeam Association will take place in Rennes and St Malo from 6 September to 6 October 2013. This first edition of an international street art event will therefore share the beautiful street art by presenting an overview of the current international scene. We will see the creation of a mural of more than 250 m long, several paintings on building facades and three exhibitions.

The mural will bring a dozen european artists but also across the Channel chip such as Rime / Los Angeles, Scien and Klor / Montreal, Flying Fortress / Hamburg and others chosen for their quality and their influence on contemporary graffiti, also a selection of local and regional artists such as Kazy / Nantes, Pedro / Nantes, Briks / Saint-Brieuc, Dino / Rennes, Pear / Rennes Weather / Rennes ...

DMA gallery: from September 14 to October 2 with Flying Fortress, Zay and Kid Crap, three key members of the group JBCB.

In this context, Flying Fortress, and zay Kid Crap, three key members of the crew for JBCB JukeBox Cowboys invest DMA gallery from September 14 to October 2. The JBCB group who hails from Hamburg, Germany, offers a look bikers sprinkled with a point of hip hop culture. They claim the wild and raw side of graffiti by mixing the stubborn breath of Rock culture with the impertinence of Rap. 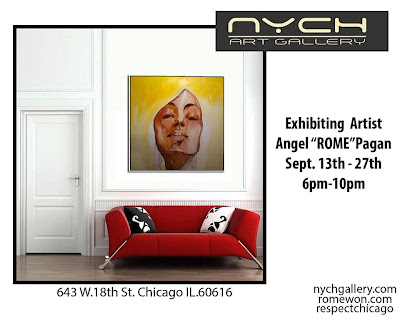 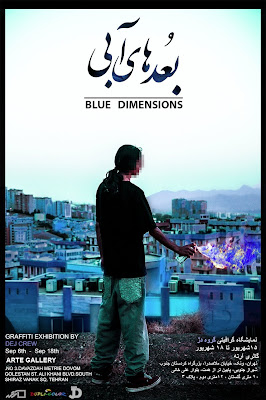 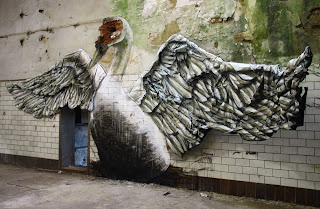 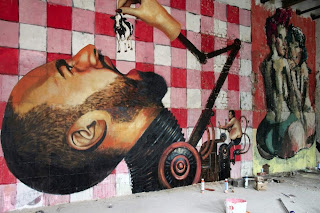 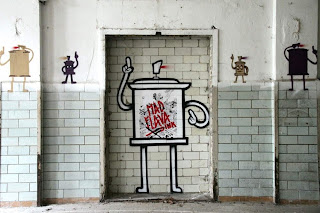 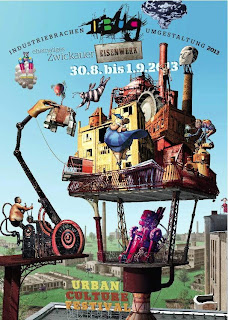 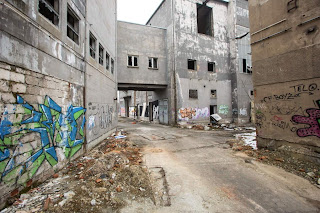 The well acclaimed IBUg festival 2013 will be on in Zwickau, Germany, the event starts in its 8th round. What began as a tiny and non-public graffiti meeting in 2006 in the small town of Meerane soon evolved into a distinguished arts project of international reputation. With artists from all over the world, fascinating pieces of art and the very athmosphere you’ll only find at IBUg.

“Zwickauer Eisenwerk” is the name of this year’s IBUg location. Up to the mid-nineties this plant was birthplace of engine blocks, gearbox castings, pumps and panels. Starting on August, 23rd, just about 100 artists from Germany, Austria, France, Switzerland, Spain, Argentina and Belarus will transform the underused industrial ground into a total work of art showing installations, graffiti, paintings and visuals. There’s not more than one week of pure creativity for artists such as Chromeo and Koala, Lean Frizzera, Mati Quiroga, Clara Reichertz, El Marian and Milu Correch, benjAMIN and Valenciennes, Pinche, Key Detail, Loomit, Atem, Quintessenz Creation and Threehouse.

>From August, 30th to September, 1st, the IBUg festival presents urban art and culture to visitors. There one can have a close look onto the creative work of the IBUg family and our fellow guests. As it is more than a off gallery IBUg also offers guided tours through the re-designed “Eisenwerk”, a cinema showing documentary films of IBUg artists and their work, lectures with Loomit (Munich-based german graffiti artist), panel discussions, a gallery and art market, and of course the notorious IBUg festival party. What is new in this round is the IBUg lounge, a dance theatre and the “IBArt” art exibition.

More detailed information and the complete program at http://www.ibug-art.de
Posted by Susan 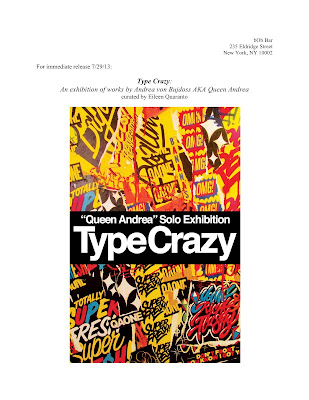 Type Crazy, a solo exhibition of paintings, prints, and collage works by graffiti artist and typographer Andrea von Bujdoss AKA Queen Andrea, is inspired by the artist’s endless love for typography and graffiti letterforms. With a visual language that is consistently bold and bombastic, Andrea’s new works serve as intricate and intense explorations of geometry, color, and form. Her custom, hand-drawn typography expresses a full range of styles—including sign painting, script, and vintage advertisement lettering—spelling out lyrics from popular rap songs by artists such as Nas, A Tribe Called Quest, and Jeru the Damaja. Featured in this exhibition is Andrea’s new series of collage works—ripped, torn, and pasted together into energetic compositions—which will invite the viewer to find typographic messages referring to the vibrancy and creative flavor of urban life.

The excitement, color, diversity and crazy energy of city life, and especially graffiti, is where Andrea finds her creative inspiration. Renegade cutting-edge art forms, brash subcultures and lifestyles that have sprang forth from an ever-changing urban metropolis give her the visual stimulus, the guts, and the urge to create and innovate. Her artistic style is influenced as much by her love of typography as it is themes of urban life, female superheroes, fame, the advertising age, the golden age of Hip Hop, funk and rap music, geometry, cartooning, symbolism, sign painter lettering, bling, diamonds and bright lively color.

Andrea von Bujdoss AKA Queen Andrea is a New York City based fine artist, illustrator, self-taught graffiti artist, and graphic designer. After earning her BFA in Graphic Design from Parsons School of Design, Andrea has worked for worldwide brands and has been featured in major art shows, toy shows, magazines, books, fashion lines and brand collaborations. She has also curated and exhibited in numerous exhibitions nationally, and is currently focusing on national and international solo exhibitions.

For more about Andrea’s work, visit superfreshdesign.com
Posted by Susan 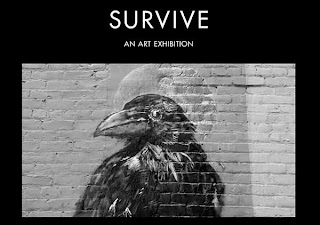 SURVIVE is an exhibition featuring a conceptually coherent and significant, original body of work by emerging artists of the L.A. based graffiti crews LTS KOG: SINER, FISHE, DREYE, KYLE THOMAS, and NATHAN SMITH.

Their abstract work on the street translates directly across surfaces, textures, and contexts onto the canvas. The fearless originality and brutal honesty of their works create a dramatic composition that reflects an aggressive obsession with technique and medium. The works’ distinctively raw aesthetic results in something chaotic, yet beautiful.

SURVIVE has consciously chosen Oakland to follow up the exhibition in New Orleans and Detroit to provoke a dialogue on the transformative power of art. Inviting Bay Area street culture purveyors and art audiences to the showcase of emerging artists in a formerly vacant structure, and now transformed ‘pop-up’ gallery space, the concept, the process, and the art reinforce the purpose: SURVIVE.

To view the making of the first in a series of murals and the journey of SURVIVE visit: SUPERVIVEREDESIGN.COM
Posted by Susan

Fundraising for Bomb It 2 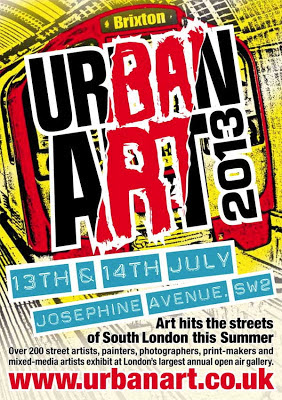 Lots of writers. All the details: http://www.urbanart.co.uk/
Posted by Susan 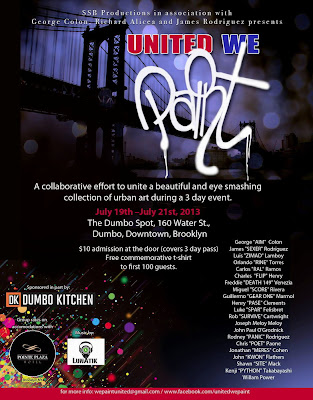