Lawyers, please: How the City of Gardena Turns Every Piece of Graffiti Into a Felony Crime 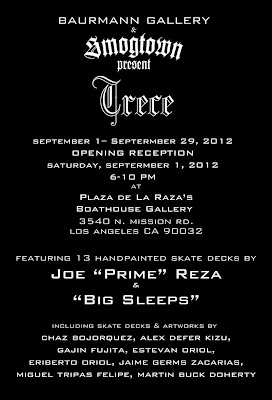 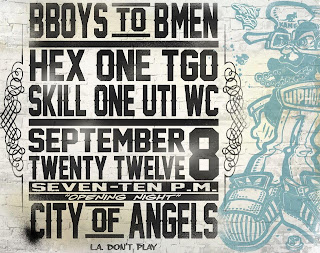 Come out support HIP HOP ELEMENTS in full effect. HEX & SKILL will be on view at the Crewest Gallery Sept 8th thru Sept 29th. 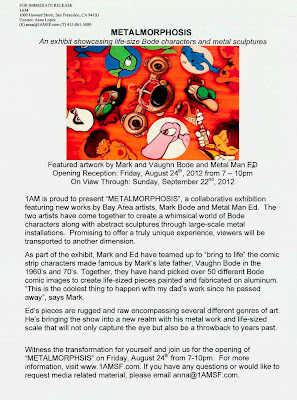 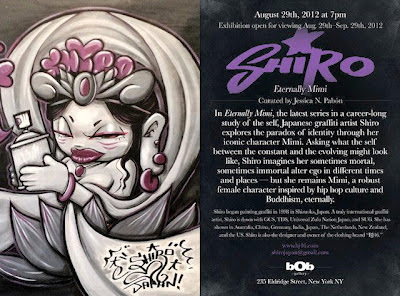 colette is pleased to present the Parlá Brothers and their new collaborative exhibition in Paris entitled: U.T.O.P.I.A. The Brooklyn-based brothers have had an on-going collaboration since childhood starting early in 1983. José drawing and painting, and Rey taking photographs of his brother and mutual friends out in the city. Respectively, José became known for his calligraphic and palimpsestic coded paintings while his brother Rey is best known for his experimental films and camera-less non-photo works he calls Scratch Graphs. José having studied painting and Rey filmmaking the Picasso and Braque like duo are a Ying and Yang that create enigmatic works of art that are unique in their conversations.

The Parlá Brothers' work has been exhibited at the Bryce Wolkowitz Gallery in NYC, OHWOW Gallery in Miami, Paris Photo, and The Miami International Film Festival: The Avant-Garde Returns. A limited edition book will accompany the brothers' colette show.

Surveillance: How Big Brother is watching you - and things to do about it


Watch this Anonymous explainer on Trapwire, the artificial intelligence system peering at you through CC TV cameras, which are installed almost everywhere that Wikileaks uncovered and published info on this week.

It will be most dangerous to young, minority youth, for example graffiti writers, who will be more "suspicious" naturally than others, but it threatens us all. Anonymous will soon publish a how-to guide on taking out the cameras, but you probably already know how. Pro Tip: wear masks.


Anonymous Releases Video On How To Defeat Facial Recognition [these techniques will not last forever, however]

http://www.biometricupdate.com/201208/the-trouble-with-trapwire/
More Trapwire info. Note that the secret system is so heinous that officials deny using it, but it's already been deployed in Seattle and Washington DC. It uses cameras that are already in place, owned by various companies and governments.

http://www.cryptoparty.org/wiki/CryptoParty
CryptoParty, an event taking place worldwide where geeks explain the tools you need to be safer and how to use them. This movement is a response to Australia's (and other countries') new laws that mandate companies retain all your internet data to use against you whenever it's convenient.

http://www.cryptoparty.org/wiki/Berlin
Berlin CryptoParty will soon publish a software guide to help people inform their own CryptoParties, so watch this space.

Tip: iMessage isn't one of the tools you should use.
http://blog.cryptographyengineering.com/2012/08/dear-apple-please-set-imessage-free.html

http://mathbabe.org/2012/08/25/nsa-mathematicians/
A mathematician who said no to the NSA explains some of the dangers we all face in the totalitarian surveillance state that's forming. Some good links are there too. All the social media are monitored, especially FaceBook.

Please spread this information widely. Preserving liberty will take all of us working together, and the first step is to inform people of the threat. This is science, not science fiction. The second step is to object loudly to your government representatives while those who can work to disable the systems.

Giving In to the Surveillance State
http://www.nytimes.com/2012/08/23/opinion/whos-watching-the-nsa-watchers.html?_r=1

Interview: Turbo, on the origins of graffiti in Turkey - in Forbes 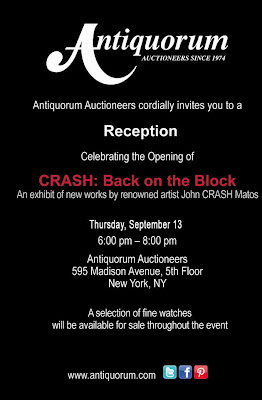 Anonymous survival guide for citizens in a revolution

Thursday 27th September, a private preview for Sponsors, VIPs and collectors with artists present. A selection of left-field DJs will be providing the soundtrack, a mix of classic and contemporary sounds.

Friday 28th September, the gallery will be open to the public all day. DJs and drinks from 6pm!

Further related activities will be announced.

Blackall Studios in London’s hip Shoreditch has been designed and created as a versatile and unique event space. It is East London’ s leading gallery for the international urban art community. The 3500 sq.ft. venue is minutes from both Liverpool Street and Old Street underground stations, split over two floors and is fully fitted with bar and PA.

For info about the event, activities, book and show catalog and all the artists involved:

Guerrero Gallery is pleased to present "Leave the Beef on the BBQ", an encompassing exhibition bringing together inter-generational writers in the world of graffiti: from pioneers who played pivotal roles during its most formative years to contemporary writers that continue to shape the ever-shifting nature of graffiti as an art form. Featuring over 70 participating writers, this exhibition provides the unique opportunity to view a narrative timeline of our urban vernacular while simultaneously creating a dialogue that highlights the diversity in stylistic approach.

Recognizing graffiti's undoubted influence as a cultural and artistic catalyst, we aim to pay due respect to all writers and showcase the relevance of their work. Despite differences in individual opinions and ideals, this exhibition serves as a bridge not only between graffiti and the fine art world but also within the graffiti world itself. We wish to reveal the common thread that these writers share- an inherent desire and need to communicate and be seen.

Opening on August 25th with a BBQ opening reception from 3pm to 7pm, "Leave the Beef on the BBQ" invites the viewer to do just that- to appreciate these artists through their unified admirable dedication and together celebrate graffiti's past, present and future.

We felt passionately compelled to present this show as a demonstration of our support and gratitude to the ever-important role that graffiti and its community of artists has had on Guerrero Gallery and its success.

NYC: 5Pointz is going away - this is its last year

Incredible imagery and poetry on the fruits of war. Each scene could be a painting.

Thanks, Tom. Peace, everyone.
Posted by Susan

IBUg 2012 – Festival of urban art and culture in Germany

The results are presented to the public during a festival of urban art and culture from 31st August to 2nd September. Among the highlights of the weekend are the lectures by Göttingen based artist Bond about the graffiti culture in southeast asia and by Manuel Gerullis, who talks about the event „Meeting of Styles“. And on Saturday night the traditional IBUg party invites to celebrate and dance to hip-hop and electronic beats with DJ Showi (Stuttgart), DefZone (illcandevilz/IBUg), Okle (illcandevilz/IBUg), Franz! (Muna, http://www.muna.de/), Konglomerat (Weimar, www.facebook.com/daskonglomerat) and Mopedgang (Glauchau, www.mopedgang.de) as well as visuals by MXZEHN (Weimar).

The side program also offers a IBUg pub which grants an insight view into the work of the artist during the creative phase, an urban art market including photographs by Conny Heimer from the last five years of IBUg, t-shirts, bags as well as works of the IBUg-artist, a film program about urban art and urban culture and an IBUg fashion show.

Videos of the IBUg 2011 in Meerane can be found ARTE Creative creative.arte.tv/de/space/IBUg_2011 or on YouTube www.youtube.com/IBUgArt
Posted by Susan

Held every Labor Day weekend, Subsurface Outdoor Graffiti Exhibition provides an opportunity for the city of Indianapolis to enjoy live work from graffiti writers. Indianapolis is a hub for graffiti writers from the Midwest to congregate and paint. Kentucky, Ohio, and Chicago are all just 2-3 hours from the city. The event hosts 40-60 artists annually.

Check out http://subsurfacegraffiti.com/ for artist and event information.


ArTicks Gallery is pleased to announce
PEETA - A SOLO SHOW
new paintings and sculptures by the Italian artist Peeta.

Peeta endeavours to realize the sculptural quality of individual letters, namely the ones that spell out his own name. Being aware of the Greco-Latin origins of today's modern alphabet which give it a certain abstract, rather than figural, quality, his task departs from this graphical history to follow the formal methods of Chinese and Islamic calligraphy. With his works, the artist always selects the specific letters "P-E-E-T-A" and breaks them from their generic typographical form, stylizing them with shape and volume beyond their mere semantic function. Thus his lettering is brought into the fluidity of the urban, where words are continuously ruptured from their own histories, readapted into idiom and gestures learned from the street.

And it is this urban terrain that Peeta is always drawn to: street walls, trains, abandoned factories. In a way, his work is record of evolving inscription—not in its traditional sense, but in terms of a fluency acquired through the urban vernacular. Peeta calls this a "geometry of writing", where the rules are changeable and words are modified, deconstructed and regenerated as they intersect with convention and the new.

Peeta, also known as Manuel Di Rita, has been active as a graffiti artist since 1993 and is currently living in Venice. He is a member of the EAD crew (Padova, Italy), FX and RWK crews (New York City) and has participated in graffiti jams and Meeting of Styles events in Europe and the Americas. His work explores the potential of sculptural lettering, both in painting and in three dimensions. Peeta has exhibited at the Santorini Biennale (2012); Megastore Gallery - The Hague (2007); Magazzini del Sale - Venice (2007-2008); Edgeart Gallery - Manchester (2008); PrettyPortal Gallery - Düsseldorf (2009); Baron Gallery and Ayden Gallery - Vancouver (2010-2011); Da Baker Gallery - New York (2010); and H+ Gallery - Lyon (2011), among many others.
Posted by Susan 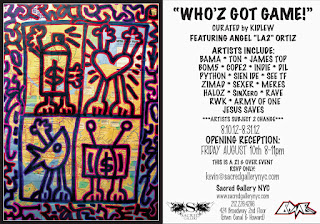 "Who'z got game!", August 10th (8-11pm), at Sacred Gallery NYC. This group gallery exhibition, curated by KIDLEW, showcases some of the best names in the NYC street graffiti scene. Starting with artists from the late '60s and working up to modern day, Kidlew personally went after the best names in the game to bring you a true NYC graffiti Subway map show.

The gallery will be auctioning off a true 4'x5' NYC subway map that exhibiting artists will collaborate the night of the gallery opening. 100% of the proceeds from the won auction will go to The Coalition For The Homeless http://www.coalitionforthehomeless.org. The auction will be on display and available for bidding all month, and will close on the 31st.

This is a strict RSVP ONLY event so you must email
Kevin@SacredGalleryNYC.com to be put on the list. 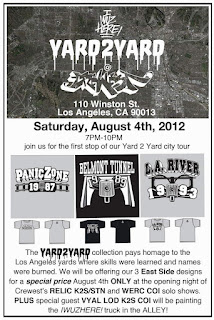 New T-shirts and gear from IWuzHere in Los Angeles

Henry has started to release his archives!

The first is available as a downloadable iBook on iTunes.

This book can be viewed only on an iPad with iOS 5.

It's only $6 USD - it's big, so it takes a while to download, unless you're on cable modem.

Info from the linked page:

Henry Chalfant's Big Graffiti Archive is a work of visual anthropology and one of the seminal documents of American popular culture in the late twentieth century.  The original artworks depicted here, which have been the inspiration and guide for thousands of youthful artists around the world,  were never able to endure for long before the city cleaned the cars, or the artists' enemies crossed them out.  Chalfant's patience and determination in hunting down and capturing these masterpieces with his camera has left the world with a representative cross section of some of the best work by the most talented young artists who painted New York City's subway cars in the seventies and eighties, the golden age of graffiti.   A handful of Chalfant's photos have been featured in such books as Subway Art and films like Style Wars.  Now for the first time, the entire collection will be made available, released serially over the next year until all 800 trains have been published.
Posted by Susan