In conjunction with Brazil's appearance as guest of honour at the Frankfurt Book Fair in 2013, the Schirn Kunsthalle Frankfurt is presenting the multifaceted world of Brazilian graffiti art for the first time ever in Germany. The major cities of Brazil are home to one of the world's most vital and fascinating graffiti scenes.

Eleven artists and artist groups from São Paulo and other Brazilian cities have been invited to exhibit their paintings in urban settings throughout Frankfurt, beginning with the Schirn building, and thus to alter the everyday image of the city. Their works include figurative and abstract, light-hearted and socially critical paintings ranging from oversized murals to unpretentious, ephemeral signs and symbols. They will appear, among other places, on bank towers, bridge abutments on the banks of the Main, the floor of the "Hauptwache", "St. Matthäus" Church and the former city police presidium.

Yet another highlight is a painted subway train. Known as a "whole train", this form of graffiti is regarded as the supreme discipline among graffiti artists. A mobile app developed specifically for the exhibition featuring a wealth of background information and artists' videos is available to help visitors navigate as they stroll through downtown Frankfurt.

The metropolis of São Paulo is a leading centre of Brazilian street art, rivaled only by Rio de Janeiro and Curitiba. Since the mid-1980s, the local scene in that city has evolved into one of the most vital and artistically diverse street-art cultures in the world. It is characterized by highly distinctive and extremely varied interventions in urban space – and it is omnipresent in São Paulo.

After twenty years of military dictatorship, the strong desire to promote the free expression of public opinion led to the growth of a politically motivated counter-culture. In contrast to the global scene, graffiti is not only tolerated in the cities of Brazil, it has been accepted to a certain extent as part of the visual culture. Brazilians distinguish between pixação, the Brazilian form of tagging, and graffiti, as represented by large-scale figurative and abstract murals of the type painted by the eleven artists invited to Frankfurt by the Schirn.

Chronologically speaking, "Street-Art Brazil" begins with representatives of the first generation of grafiteiros (Vitché, Speto and Tinho). Born in the late 1960s and early 1970s, they began invading the streets with their paintings after the fall of the military dictatorship, thus giving voice to the desire to promote the free expression of public opinion after years of silence during and after the oppressive rule of the military regime. Facing a shortage of artistic resources, they opted, as they still do today, for wall paint and rollers in addition to relatively expensive spray cans. 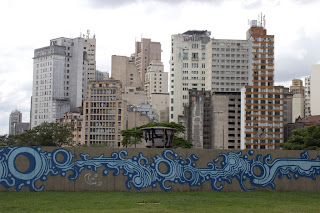 Zezão's blue, ornamental arabesques derive a strong social component from the settings in which they appear. They lend a peculiar beauty to some of the poorest and most derelict quarters of São Paulo. His arabesques not only cover flat walls, they wrap themselves three-dimensionally around objects in their environment, such as the ruins left behind by fire in the Favela do Moinho. In Frankfurt, Zezão's works grace the dark corners of the Untermain Bridge and draw attention to the ceiling in the east arcade to the Schirn building for the very first time.

Nunca gives expression to the Brazilian roots of his paintings in his works presented in Frankfurt. On the firewall of the building at Niddastraße 64, he is painting the sequel to a mural painted in São Paulo in August 2013 in the original scale. A large reproduction of the painting begun in Brazil can be seen in the rotunda of the Schirn. His figures are composed collage-style from indigenous and African motifs and elements of contemporary everyday Brazilian and European consumer culture. They are testaments to the quest for a uniquely Brazilian identity. 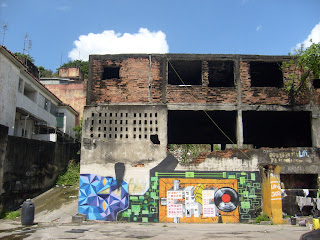 The hoarding around the Stadthaus construction site that runs alongside the Schirn building is the setting for vividly coloured works by Gais. The theme of his geometric paintings is the invisible world that lies behind things. By placing abstract paintings in the Favelas of Rio de Janeiro, he exposes this painting style, which is associated with high culture in the field of visual art, to a broader public. With his two-dimensional pictures he also creates accessible spaces which invite the viewer to become a part of his art with all five senses. Thus

Gais' work is very closely related to Brazilian installation art, the theme of another exhibition of Brazilian art scheduled to begin on 2 October 2013 ("Brasiliana. Installations from 1960 to the present", 2 October 2013 to 5 January 2014). 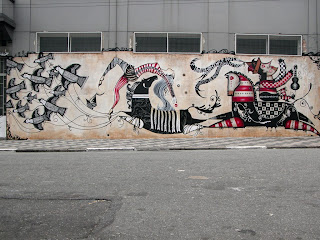 Dream worlds populated by fantastical beings play a major role in the paintings of the artist duo Jana Joana & Vitché, who have been working together for fifteen years. Their clowns, harlequins and birds shape the face of the entire Cambuci district in São Paulo, where Vitché was born and the two artists live today. Vitché is one of the pioneers of the Brazilian scene, and stands out from the international scene with his works in the style of folk art. Yet it was hip-hop and breakdancing that led him to graffiti. Passers-by will find his poetic paintings on the walls on both sides of the outside stairway at the Schirn. 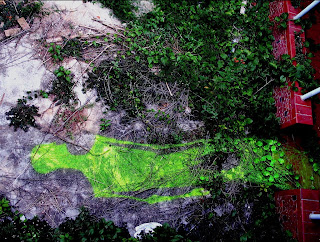 Herbert Baglione achieved the transition from his image as a graffiti-writer to that of a street artist in 1997 by disseminating a written message in the streets of São Paulo announcing that his pseudonym "Cobal" was dead. Since then, he has worked under his real name, and paints primarily ghostly-looking creatures on streets and pavements – figures that relate to the buildings and physical features in their surroundings. The broad, open square of the Hauptwache serves as the canvas for his work in Frankfurt. At 900 square metres, this is the largest surface area painted by an artist for this exhibition. 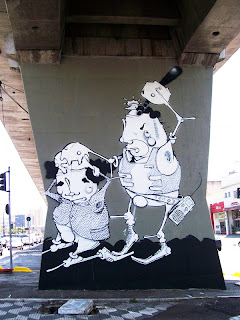 Onesto's works reflect spontaneous situational encounters with pedestrians. Onesto inscribes the events that unfold in the microcosm of the city into just such places, thereby attracting the critical attention of viewers to political or social issues. His work in Frankfurt will appear on two buildings on Neue Mainzer Straße 57 and 59. 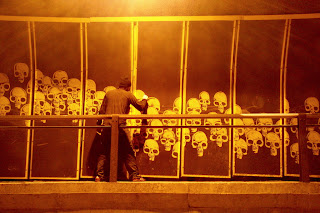 In his "Ossario" (graveyard) project, Alexandre Orion does not merely use the exhaust-blackened walls of a tunnel São Paulo as the substrate for his intervention. The series of skulls that extends over 300 metres of wall was created by wiping away the accumulated soot. Thus the wall scarred by air pollution is the sole material for his painting. Orion adds nothing to the city; he draws from it. Although his action did not meet the criterion for declaring graffiti a crime – defacing a public surface – the painting was removed by the city government and thus fell victim to aesthetic and substantive censorship. Orion uses paint mixed with soot from São Paulo as the material for his 400-square-metre painting on the Sparkasse building on Junghofstraße 27. 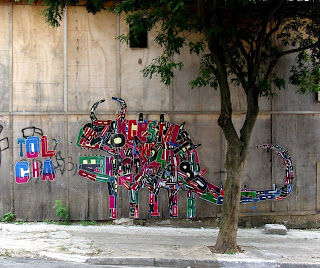 Before public advertising was officially banned in São Paulo in 2007, Fefe Talavera used posters and billboards as points of intervention. Today the artist prints her own letters and combines them in large-scale "monster paintings". Talavera's figures call to mind brightly coloured Alebrijes – paper-maché figures of the kind originally created by Pedro Linares in 1936 and inspired by fantastical dreams – which have since become an integral part of Mexican folk art. The vividly coloured dragon figure on the glass portal of the twin towers of the Deutsche Bank echoes the vertical character of the building. 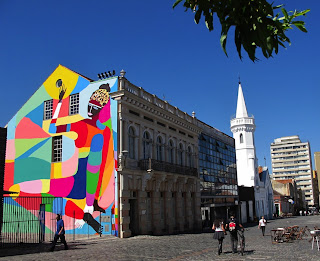 Born in Curitiba in 1988, Rimon Guimarães views the act of painting on the street as performance per se. The city is his stage, passers-by his audience. He accompanies his spraying with dance, vocals and music, which he produces himself with the aid of such everyday objects as buckets or bicycle bells and with his own voice. Like the artist's graffiti, his music is inspired by traditional African art and culture. His large, brightly coloured mural can be seen on the hoarding at the construction site of the former KfW building at Bockenheimer Landstraße 102-104. In April 2013, before the building was razed, the Schirn Kunsthalle hosted the Graffiti Academy here. 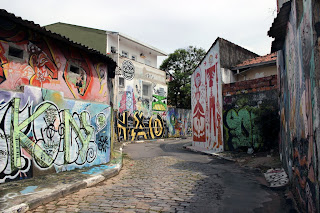 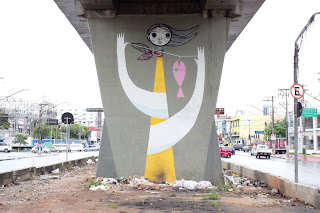 The stories Speto tells in his murals are inspired by the north-Brazilian tradition of "Literatura de Cordel". These mystical tales illustrated with woodcuts were written during a period of cultural blending in the seventeenth century. They are composed of a collage of indigenous legends, Christian motifs and elements of African culture. As a vehicle for the processing of current developments in society, "Literatura de Cordel" also served as a medium of communication. As such, its function is similar to that of Brazilian graffiti today. The point of departure for Speto's painting on the façade of the St. Matthäus Church in Frankfurt is a Cordel poem written by the artist about a bizarre day in the life of a "motoboy". Paulista (residents of São Paulo) use this term in reference to the roughly 220,000 bicycle couriers in the city, many of whom lose their lives on daily trips through the heavy urban traffic. 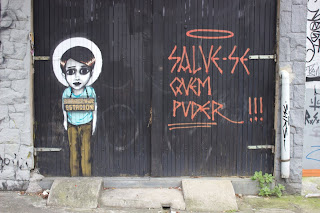 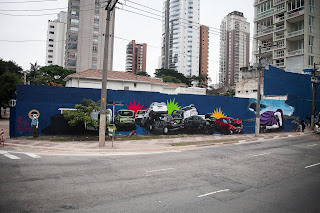 The countless abductions of children in the 1990s are the theme of Tinho's paintings. He presents images of bound, weeping and fearfully crouching children based on photos from missing person ads and search queries on tomato packages or milk cartons. In most cases, these painted children gaze directly into the eyes of the viewer, yet they remain isolated and lonely nonetheless. Some of his figures appear alone beneath city rail tracks, in front of garage doors or behind bushes, as if they were actually present at these places in the city. He often incorporates them into backgrounds of his own design featuring high-rise buildings and traffic scenes typical of São Paulo. The former Frankfurt police presidium serves as the canvas for his emotionally gripping works.

In collaboration with Onesto, Tinho will also be painting a Frankfurt subway train. With this work, the two artists address yet another aspect of the graffiti scene, in which collective undertakings play a crucial role.

ACCOMPANYING PROGRAM: At the opening of the "Street-Art Brazil" on
Wednesday, 4 September 2013, beginning at 7 p.m., DJ Daniel Haaksmann will be playing a programme of hip- hop music from São Paulo and Baile Funk from Rio de Janeiro at a festival in the streets around the graffiti paintings at the Schirn.

APP: In addition to the exhibition catalog documenting the temporary works of graffiti in Frankfurt, the Schirn has developed a mobile app designed to help visitors navigate through the city. The app also provides a wealth of information in the form of films, photos and background articles on the Brazilian street-art scene. These documentary tools represent the fruits of numerous discussions and walks by the curator with the artists through their city districts. They not only enable users to experience a fascinating world of images, they also provide additional insights into the realm of meanings in which the original grafiteiros worked. The mobile app is available free of charge for iOS and Android and can be downloaded in standard stores (less than 5 MB, online map via Google Maps, offline map, e-mail sharing functions, Facebook, Twitter, YouTube, Pinterest, link to the Schirn Magazine, general information about the Schirn Kunsthalle, integrated event calendar for the exhibition).

SPONSORED BY: The "Street-Art Brazil" exhibition is sponsored by the KfW Stiftung.

Additional support is provided by Funarte, the Brazilian Ministry of Culture and the Brazilian Foreign Ministry. The "Schirn Zeitgenossen" are funding the work by Alexandre Orion. The Deutsche Bank AG is providing funding support for the work by Fefe Talavera and the Caparol Company is supplying the artists with high-quality paint. The project has also received substantial support from the City of Frankfurt am Main, primarily through the Departments of Culture and Traffic and Transport, and from numerous institutions and private building owners who have made space available on their building façades.

SOCIAL MEDIA: During the exhibition the Schirn will be communicating in the social web with the following HASHTAGS: